A GIRL COMING-OF-AGE ON WEST-SIDE STREETS

A Jewish woman, Hilda Satt was born in Poland circa 1885 and migrated to Chicago with her family in 1892. Her father, educated both in languages and mathematics and having learned the art of carving from his father, became a tombstone carver by trade, a skilled and well-paid occupation.

Polish, Russian, and German nationalists hated each other, but they hated the Jews living among them even more. The Satt family lived well in Poland when the peasants believing the Jews killed Christ were incited to the retaliation of Pogroms. Moreover, the Russian Army’s sustained efforts impressing Jewish sons into harsh compulsory military service accelerated the exodus of the Jews to the U.S.  The pervasive corruption of public officialdom in Eastern Europe provided Jewish families a way out. Bribery of local civil servants was the currency at every level of policing.

In Warsaw in 1891 Hilda’s father heard about planning for the World’s Fair in Chicago in 1893. With the worsening political and cultural environment, he made the decision to move his family to the U.S.  His wife from a well-to-do family and a homemaker did raise objections. Nevertheless, he secured a good position as the only tombstone carver qualified in Hebrew, Yiddish, Polish, Russian, and German inscriptions for the Chicago Jewish community. And he arrived in Chicago in time to visit the Columbian Exposition.

In Chicago, the family lived in comfort on South Halsted Street until 1894, when the father died suddenly at the age of forty-four. Settling in Chicago the family had saved little. Left behind after the father died was an impoverished widow and five small children. With no training outside the home, and unable to speak English (which she never did learn), Dena Satt now had to support her bundle of children. As a single mother and immigrant, her options  were all degrading: charity, scrubbing floors, or taking in wash. Not for her. With small kids in tow, she began laboring up and down multiple flights of tenements stairways, and fluent in Yiddish she became over the years a relatively successful peddler with a regular clientele

For twenty years Hilda’s mother made a go of supporting the family, continually moving addresses in the Maxwell Street area in response to the cost of rent and family resources. After twenty years, one can say that Hilda’s itinerant mother plying the streets and frequently moving addresses was a mirror image, an alter ego to Jane Addams comfortably settled inside Hull-House Settlement. The gulf on Halsted Street yawned between peoples who were in physical proximity: so close yet so far apart culturally. Only once in the twenty years did Mrs. Satt enter Hull-House and meet Miss Addams, with Hilda as translator.

Hilda was a good student at the Jewish Training School, but typically family resources were reserved for the education of her brothers. At age fourteen she left school and as expected found work to assist in the support of the family and herself.  Growing up on local streets and working at a variety of local jobs, she became embedded in the working lives of the neighborhood, vividly depicted both in her original short stories and later in her pages of memoirs. Regarding her subsequent career as a social worker after her husband’s death, she had numbered among the few fortunate to become a protégé of Jane Addams in Hull-House with opportunities for higher education. 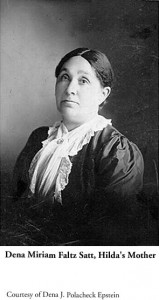