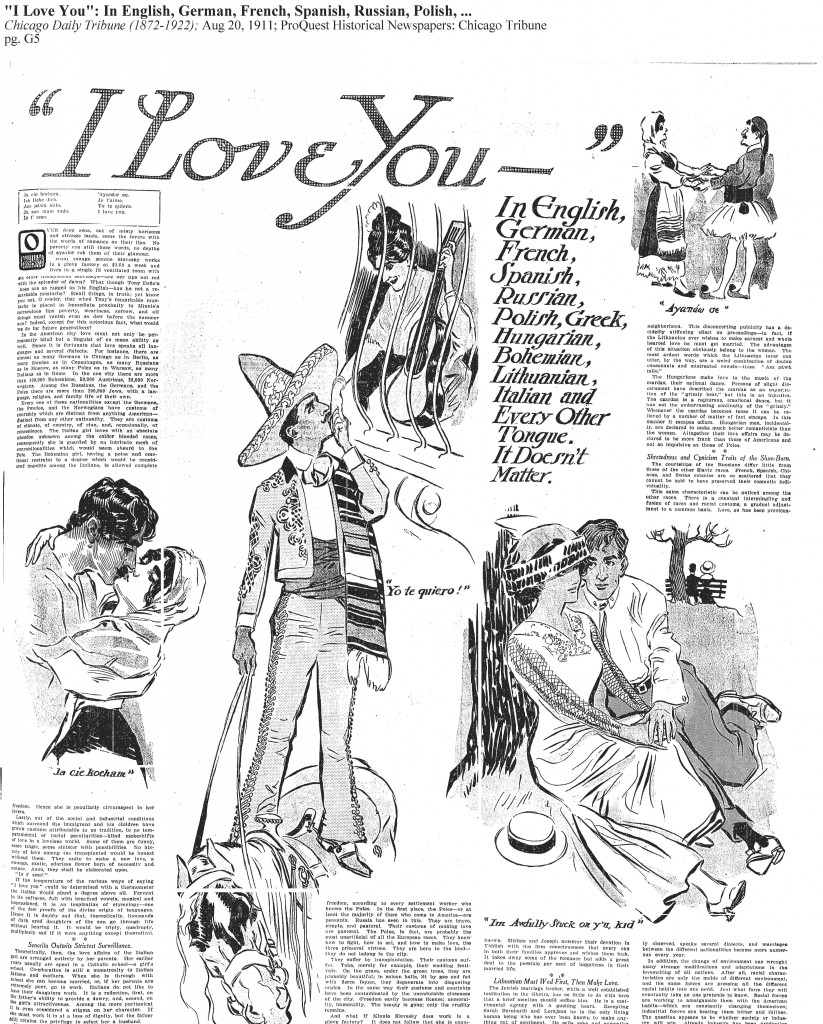 Evidence that Chicago was a cosmpolitan city with many different races, nationalities and spoken languages proliferated in words and images. In 1911 a Chicago Daily Tribune article listed the languages in which one can say “I Love You.” “Fourteen Languages Beside English Spoken Here by Permanent Colonies of More than 10,000″ wrote another. Elias Tobenkin, a Chicago Daily Tribune feature reporter whose beat was Chicago’s West side, wrote that in Chicago an immigrant’s ignorance of English was no obstacle to success.  It did not demote a skilled engineer to ditch-digging or a physician to street cleaning. Chicago built up large foreign colonies so rapidly “that a man from almost any civilized country can live here for years … and have no need of the English language or seldom hear a word of English spoken.”   bjb 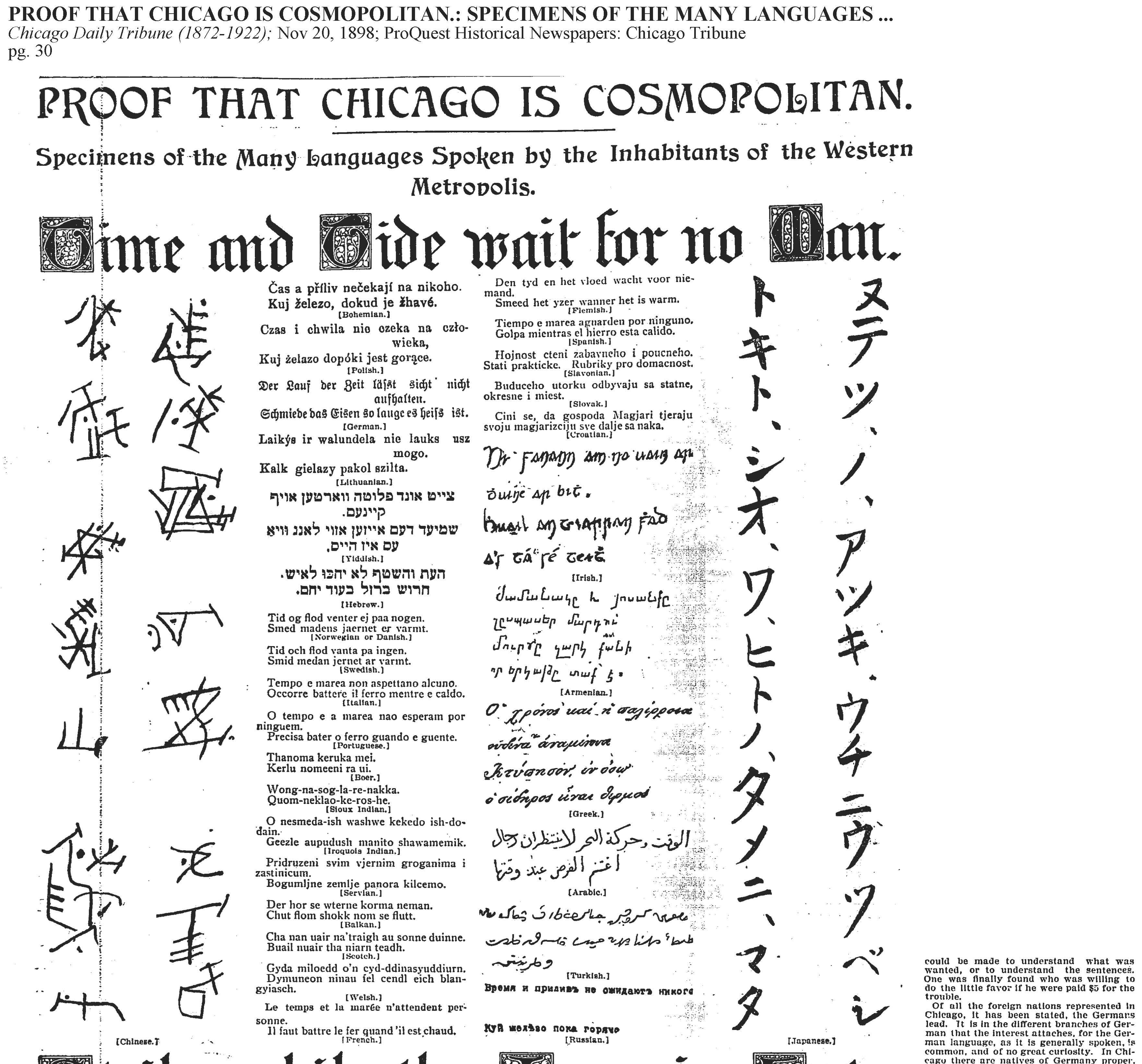 The literary elite in Chicago including Jane Addams, Henry Blake Fuller, Hamlin Garland, and the Anglo-Jewish Israel Zangwell preferred to characterize Chicago’s ethnic and racial diversity as a “melting pot” or perhaps a “mixing bowl” deferring to the  assimilation, absorption,  and amalgamation of peoples unlike themselves. In contrast, down the streets of immigrant colonies, in the trenches on the West side, the piercing sounds of noisy and shouting voices evoked the Biblical image of confusion and the din of Babel.  As a local linguist said Chicago was “an unparalleled Babel of foreign tongues”–unparalleled compared to the claims of Constantinople, Cairo, and cities of the Orient. The multitude of diverse and unintelligible voices in the village square clashed with with the Anglo-American social vision of a harmonious “community” embodied in a mono-lingual Settlement House represented by Jane Addams.   bjb

Carl Darling Buck (1866-1955) became professor of Sanskrit and Indo-European comparative philology at the University of Chicago in 1892. A graduate student at Yale, he studied classical languages abroad at Athens and Leipzig. A specialist in Italic languages and Greek dialects, he was uniquely qualified to evaluate the polyglot linguistic environment in Chicago in 1903.

Linguistic conditions, he wrote, correspond to “present racial divisions … like the Irish language is the best available test of nationality.” Enumerators in the Census Reports made significant errors. 50,000 Jews, for instance, almost exclusively speaking Yiddish, a bastard form of German and Hebrew, were incorrectly listed either as Polish or Russian speakers.

Chicago was the fourth largest Polish city in the world.  It had twice as many Poles as any other U.S. city, and it had the largest Greek population. Chicago was the second largest Bohemian city in the world, with three times as many Bohemians as elsewhere in the nation. There were fifteen Bohemian newspapers in the city including four dailies. Also, Chicago was home to the greatest number of speakers of Croatian, Slovakian, Lithuanian, Swedish, Norwegian, Dutch, and Danish populations in the country.

In Chicago, Buck observed, there were some fourteen languages “each of which is spoken by 10,000 or more persons. Newspapers appear regularly in ten languages and churches services may be heard in about twenty languages.”   bjb 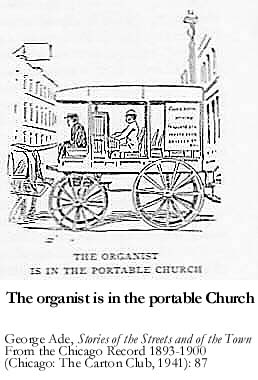 George Ade (1866-1944) was born and raised in Indiana in a family of seven children.  He joined the Chicago Morning News in 1890.  It later became the Chicago Record for which he wrote the column, Stories of the Street and of the Town, on America’s burgeoning Midwestern city. His work was richly illustrated by his lifelong friend John T. McCutcheon.

Ade’s subject was the everyday life and common worries of the “little” man and woman–average, ordinary, lower middling, colloquial-vernacular-slang speaking, arriving in the city from anywhere to make a go of it. The Stories “are supposed to deal, more or less truthfully, with everyday life in Chicago.”  The “big bugs,” for instance,  lived behind picketed fences of private ownership and purchased propriety.

In Ade’s world, the diversity of peoples and social types glanced, careened, and bounced off each other. Urban life was “incongruous,” lived sideways, driven by partial understandings, missed meanings, punctuated phrases, superficial appearances, diversionary slogans, depths upon depths of intentions– the Babel of modern life.

Ade’s version of the urban world was not “surreal,” with every nationality, race, and class living inside a funnel speaking only to itself.  Always partial, never fully revealed, the imperfections of linguistic contact in vernacular slang was the urban game of Babel.   bjb 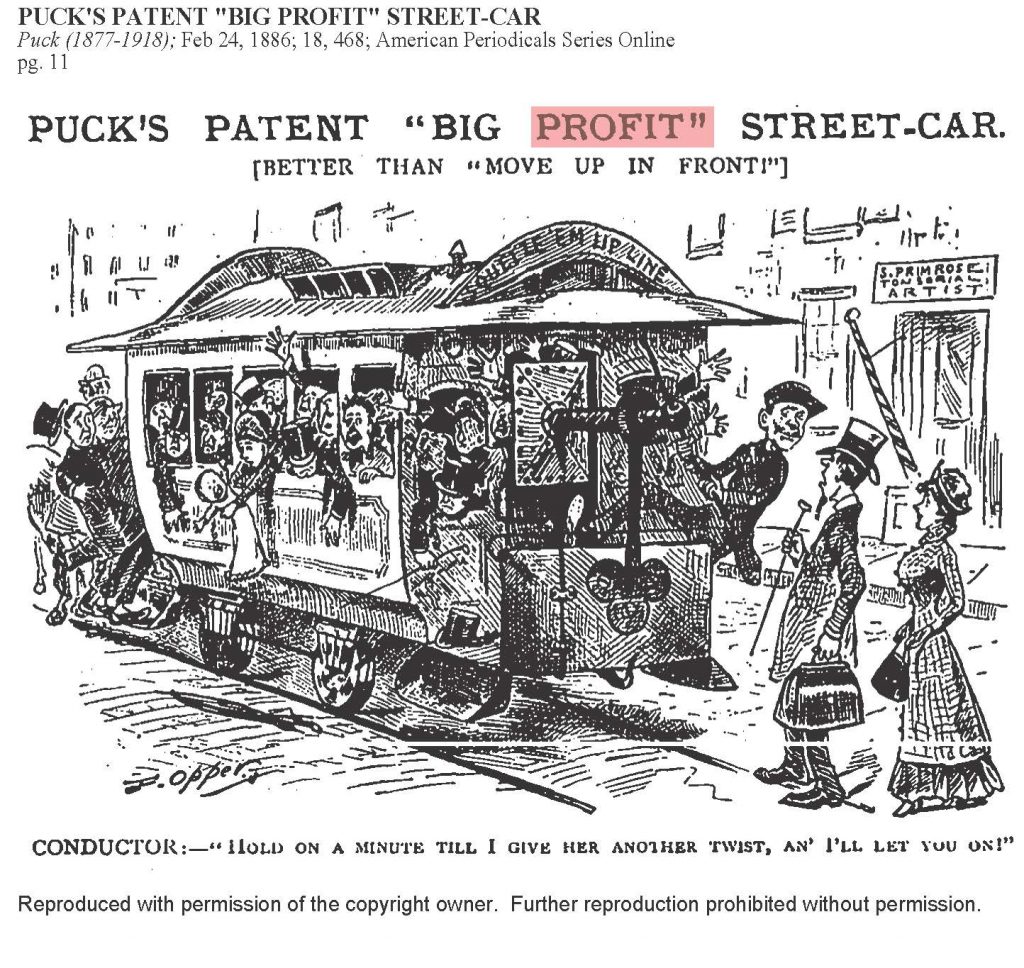 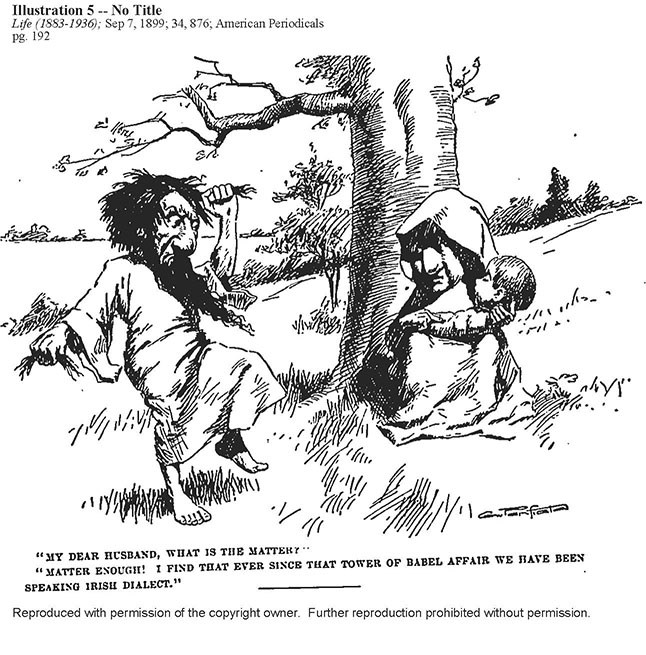