Chicago was a city of streets. Reporters, journalists, and reformers fixated their attention on West Side “slum” and “ghetto” streets. These streets were more than mere backdrop and scenery for the conventions of human melodrama, as earlier envisioned by crusading Victorian illustrators and evangelical Christians like child-saver Charles Loring Brace and slum photographer Jacob Riis.  They had portrayed derelict street “guttersnipes” and homeless “street Arabs” whose failure of moral “character” drove a downward cycle of fate: wanton  crime, prison, a deserving death.

Children, children were everywhere on West Side streets, coming of age, working, playing, and asserting their generational independence. What now changed was that streets were not backdrop or mere scenery. They were active players in the dramatic encounters between strangers and diverse nationalities and races in the immigrant city.  “Ghetto” streets as witnessed by the lens of the photojournalist camera were dense business districts with intense activity from street to curb to sidewalk and first-floor shops to residential apartments above. Children unsupervised by adult surveillance–the elephant in the reformer’s room–were a ubiquitous and attention-grabbing presence on crowded West Side streets.   bjb

Pictured by the camera, children worked the street trades, scavenged for valuables, gathered on tenement stoops and stairwells, pushed strollers and cared for younger siblings during the day when parents worked. They darted defiantly between moving vehicles, played in make-shift playlots and at make-up street-ball.  They hopped precipitously on and off moving street cars. Of course they engaged in petty theft, pretty much like children everywhere, including in well-to-do neighborhoods. Was theft, and worse assault, a pathological response to ghetto streets, as argued by social workers and reformers?

The street camera now pictured children assisting on peddlers’ wagons, unloading produce in the street markets, rushing the growler (carrying a pale of beer) to pa’s work site for lunch, selling wares from sidewalk tables, runners and messengers for local businesses, playing stick ball in alleys, yards, and on streets, mobbing the “hokey-pokey” (ice cream) man on steamy days, lurking on stairwells and between buildings, shooting “craps” on sidewalks, taunting passing pedestrians, and playing truant from school.  Everywhere one looked was the presence of children, often mugging for the cameraman.  Photographs without unsupervised children in sight were not the norm.  bjb 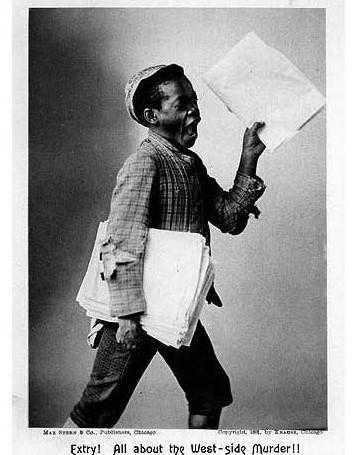 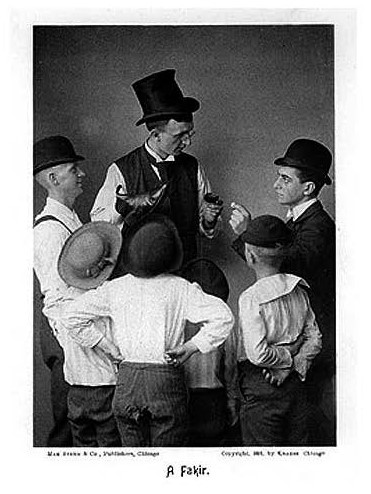 “Street Smarts” was a phrase first heard on city streets in these years, vernacular street lingo or urban slang for  opportunistic and shady street types. In the genre of visualized street “character studies.”Sigmund Krausz Street Types of Chicago (1892) was the first book of its kind published in the U.S., including both full-page studio photographs and an accompanying text.  “Character” studies were a familiar feature appearing in nineteenth-century newspapers.

The trade audience for Krausz’s attractive book of pictured stereotypes was visitors to the city for the 1893 Chicago World Exposition. “The men who meet us in this book,” Krausz wrote, “are not of the order of those who control the destinies of the city by the vastness of their enterprises they direct, but all of them in their modest sphere contribute their mite to the active rush which ebbs and flow along our busy thoroughfares.” 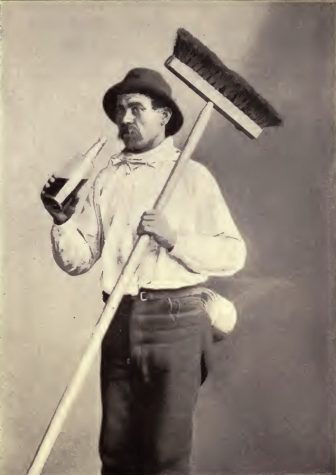 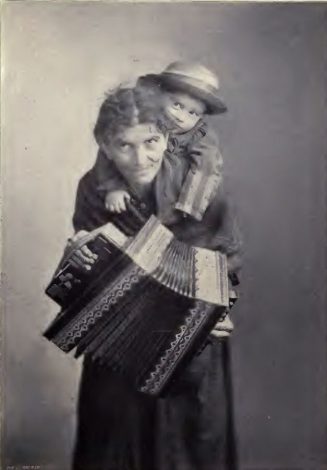 Buyer beware! A sucker born every minute! Every hook has its fish! Suckers lie in wait for bait!–newspaper headlines shouted. Shopping society women, heed the obsequious Masher on busy streets.

The dominant central commercial city in the Midwest, Chicago attracted hawkers and walkers–itinerants making a living on the streets by fast talk, sharp advertising, practiced deception, and a quick wit. These street types were practiced in the skills of their peripatetic trades. Hawking and hustling worthless goods and banal entertainment to the ever-present gullible tourists, transient bargain hunters, and adventure-seekers–urban “rubes” all–made for an urban gold mine, Chicago style.  bjb 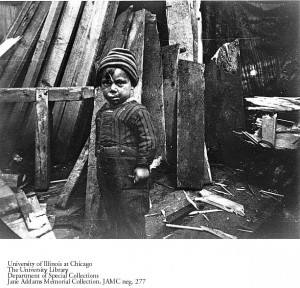 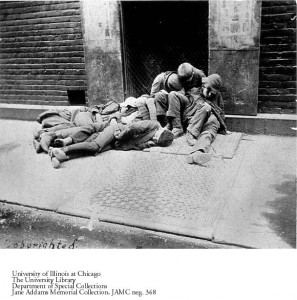 In nineteenth century cities, the Street Arab was classified as an abandoned and homeless child roaming the streets in herds and subsisting by begging and thieving. In Charles Loring Brace’s classic and influential Christian evangelical treatise, The Dangerous Classes of New York (1872), these illiterate, “ignorant, untrained, passionate,” and unemployable vagrants were the core of a criminal class preying on their surroundings. In Brace’s Victorian sermon, a cursed fate awaited the homeless vagabond’s demise in a prison cell and execution by hanging. The Street Arab’s presence was an offense and slur on “civilization,” and challenged activist child savers to devise organizational plans for redemption such as Brace’s homes for news boys. In his popular fiction in the period, Horatio Alger recounted stories of Street Arabs rising to respectability and happy endings by means of caring parental figures and lucky breaks–a winning formula of atonement repeated in contemporary newspaper reporting.   bjb 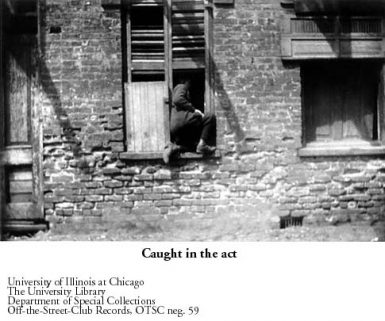 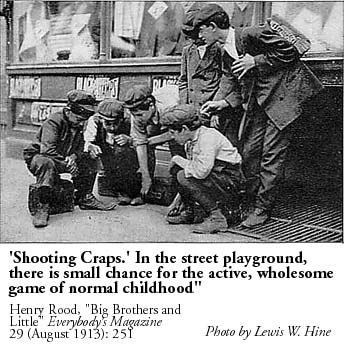 Jane Addams in The Spirit of Youth and the City Streets (1909), a well-received reform tract, declared “war” on the unsupervised streets of the industrial inner-city. (Both the police and public school teachers were commonly patronage appointees enforcing the will of local bosses not interfering club women and do-gooders.) Addams’s reform tract took its place in a line of publicized works in these years, including publications by Florence Kelley, Elizabeth deKoven Bowen, William I. Thomas, E. Burgess, William Healy, and Philip Davis. Chicago had become an institutional center for clinical studies on the urban “boy problem,” “girl problem,” and “defective” child. West Side streets were the laboratory for reform-oriented social work schools, settlement houses, specialized institutes for juveniles including the landmark juvenile court.

Adult supervision and oversight required virtues in the evolution of the middle-class mother-centered “home-sweet-home.” The absence of these virtues had consequences, a loss of adult control in densely populated urban neighborhoods where children could exercise and express their animal spirits on city streets. In The Spirit of Youth Addams at Hull-House sharpened attention on the deadening emotional effects of repetitive industrial (child) labor, the loss to future generations in a machine driven economy of traditional (old world) artisan and craft skills, and especially the material desires fevered by an irresistible expansion of consumer goods displayed in the show windows of street retail shops.

According to Addams’ insights, working children coursing down neighborhood streets were under the spell of boyish and girlish flirtatious excitement and puerile sensationalism, recorded in case studies and statistics of petty criminality and persistent “delinquency.” On city streets, puerile youth competed for status by means of modish dress. Girls showed off their colorful decorated hats. Taxi-dance halls popular with youth were unchaperoned and notorious for male pick ups.  The store-front nickel-dumps and proliferating penny arcades glorified mindless action and loud noise.

Addams was old school, an aesthetic practitioner of plain dress, physical restraint, and spiritual mastery of character. Indeed, there are no photos of Addams walking on city streets outside the confines of Hull-House, nor any of the Hull-House residents on the local streets. A single photo by Lewis Hine of a well-dressed group of three women and two men strolling down Halsted in front of the saloon across the street from Hull-House with two unemployed workers casually standing by does not identify the strollers only the location. Addams who had commissioned the Lewis Hine photo rejected it for publication in Twenty Years at Hull-House (1910).

Adult supervision and surveillance of “precocious” and “vicious” children and youth was a necessary condition for a socially wholesome and intellectually enlightened citizenry. In the Hull-House Bulletin the promotional photos of washed and well-dressed children at play and at school inside the confines of Hull-House made apparent the presence of an off-camera supervisor making eye contact with the principal subjects in the picture.   bjb 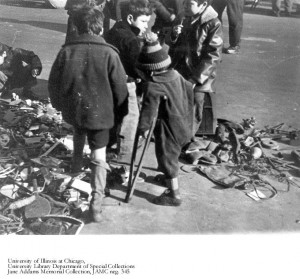 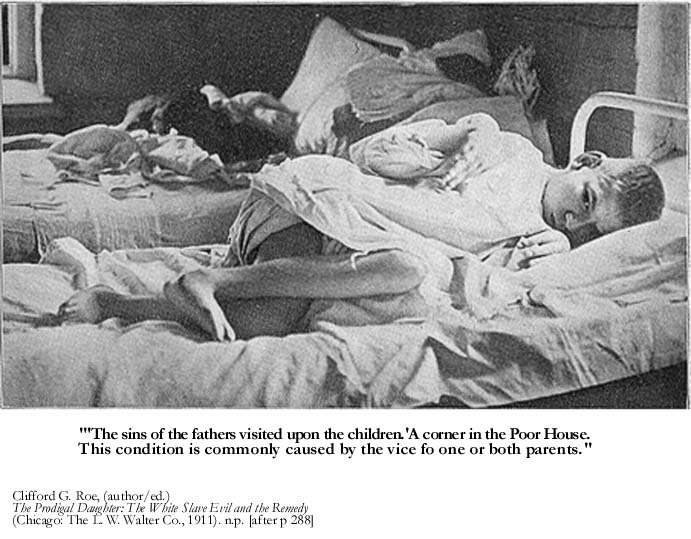 Among the most invidious characterizations in the period was the distinction between “normal” middle-class children scrupulously nurtured in adult supervised settings versus “defective” or abnormal children, sub-par even sub-human, stunted in mind and body by deteriorating slum and ghetto conditions.

At a psychological level, a West Side child brought into contact with the criminal justice system and the Juvenile Court–even for trivial and negligible offenses–was diagnosed for treatment as “defective” in the emerging professions of social work and clinical psychiatry. One report counted 3,000 children in the city as “mentally defective” (“feeble minded” meaning “moron,” “imbecile,” or “idiot”).  A second report concluded that a majority of the children in public schools were in urgent need of “surgical and medical” interventions for defective bodily health.

Physical defects were assumed to be moral defects in “juvenile delinquents.”  Julia Lathrop, an intimate associate of Jane Addams in the founding of Hull-House, concluded that the “defective child” in the juvenile court system must be classed as more than just another “youthful offender” with an excess of energy and an adventursome spirit. In the court case of one local boy out of control, “it was discovered that he was under-developed and under-weight; that his mind could hardly be expected to discriminate between right and wrong.” The “defective child” was inherently out of control, a threat to himself and herself and to the neighborhood.

Chicago’s West Side was ground-zero for a pioneering center of psychiatric institutions and the Juvenile Court where the symptomatic diagnosis of the defective “troubled girl” and “troubled boy” functioned as working daily knowledge.

In extreme terms, a race “peril” from “defective” peoples menaced middle-class, white, Anglo “civilization.”  Exposed was the dark illiberal side of celebrated liberal reform. An enlightened progressive such as Jane Addams on Halsted Street, for instance, flirted with the success of the eugenics movement in the period as one way forward. The popular proposals to separate “fit” vs “unfit” races by mandating a policy of sterilization were invariably present in this discussion.

“Our generation, said to have developed a new enthusiasm for the possibilities of child life, and to have put fresh meaning into the phrase “children’s rights,” may at last have the courage to insist upon a child’s right to be well born and to start in life with its tiny body free from disease. Certainly allied to this new understanding of child life and a part of the same movement is the new science of eugenics with its recently appointed university professors. Its organized societies publish an ever-increasing mass of information as to that which constitutes the inheritance of well-born children. When this new science makes clear to the public that those diseases which are a direct outcome of the social evil are clearly responsible for race deterioration, effective indignation may at last be aroused, both against the preventable infant mortality for which these diseases are responsible, and against the ghastly fact that the survivors among these afflicted children infect their contemporaries and hand on the evil heritage to another generation.”   bjb 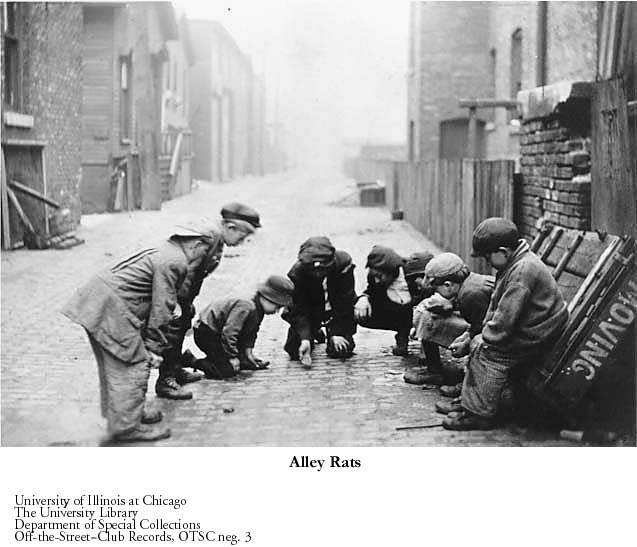 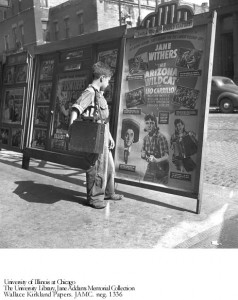 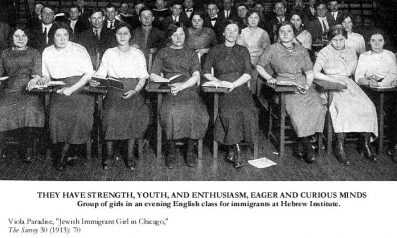 Jane Addams in particular worked to “fit” children into the norms of the progressive civilized and supervised social and behavioral order. In the inner-city slum environment,  “precocious” children became largely troublemakers, bad mannered, head-strong, self-indulgent, foul mouthed and worse.  She condemned “this stupid experiment of organizing work and failing to organize play,” condemning immigrant generations of street children to the fates of their puerile fantasies and aspirations. 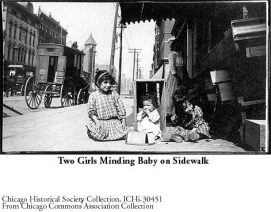 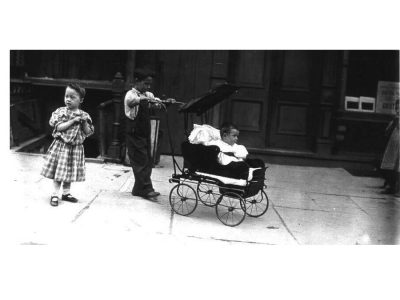 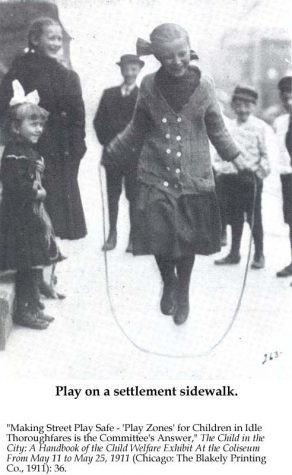 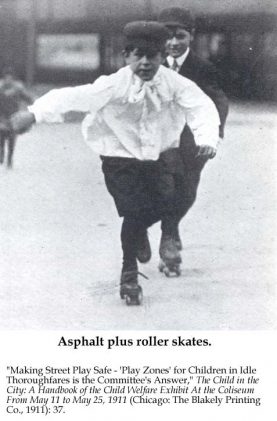